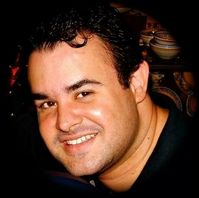 About Darwin Leon
Darwin Leon was born in 1972 in Santiago de las Vegas a small town in Havana, Cuba. In 1987, Leon's family sought refuge from the political and economical crisis in Cuba, and departed to Spain, then later continued to the United States to settle in Miami. Leon earned his Bachelors in Fine Arts from Miami International University of Art & Design, where he attended as a recipient of the 'Visual Arts Scholarship Award of Excellence' and received Best in Show at his first Juried Student Exhibition. His first direction was expressed through religious portraits. However, he found a greater enthusiasm for figurative and expressionistic forms in which he incorporated satire and irony through surrealism and cubism. Leon's work is energetic, fresh, alive and abundant with color.

Leon's art combines aspects of the masters of the Renaissance, including the technique of chiaroscuro, with his own surreal style, which he refers to as Expressionistic Surrealism. Scenic images portray the nature of expressive design through the movement of action and textured aspects. With a sharp sense of humor and figurative imagination, Darwin Leon details the social context of pseudo-political, human involvement with a gift for enhanced form and characterization. Displaying the imbalances of society with a satirical perspective, his artistic creations animate the discontinuities of the post industrial order. Leon's paintings play on the interpersonal deceptions that move a society.

For four years, Darwin Leon was an Arts Instructor for drawing, painting, anatomy and modern painting at the South Florida Arts Center, Miami Beach. He currently resides with his two children in Bradenton, Florida, where he teaches Drawing and painting at the Art Center for eight years now.

I believe in revising classical methods of art to create a more contemporary form of expression. My art mirrors life and the social issues of our time, while revealing the historical aspects of humanity that continue to govern and motivate us even today. In my work, the human figure is the constant denominator drawing on classical interpretation and moving into surrealism that symbolizes the echo of human nature, distortion, and motivation through time. With a foundation for serious commentary, I employ the levity of humor so that people can grasp the meaning without feeling too challenged by the message.
Darwin Leon
Powered by